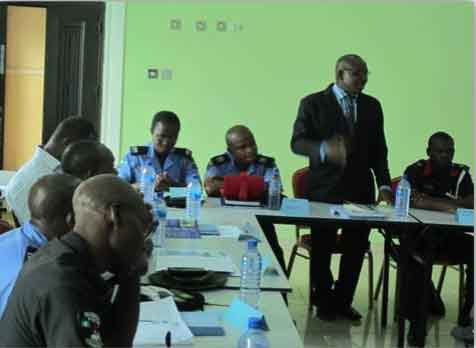 In order to ensure that security operatives in Niger Delta carryout their lawful duties within the purview of Human Rights framework, Leadership Initiative for Transformation and Empowerment (LITE-Africa) organised a two-day capacity building training on Voluntary Principles on Security and Human Rights (VPs) for security personnel’s.

This activity was convened courtesy of a project titled “Strengthening the Capacity of Security Forces on the Voluntary Principles on Security and Human Rights in the Niger Delta” (SCSFVP). Funded by the National Endowment for Democracy, SCSFVP aims to build the capacity of security forces and operatives in the Niger Delta region with skills to effectively use national and international human rights systems in their work towards human rights promotion and protection in their areas of operation.

The training which held on 20th-21st November 2014 in Warri, Delta state,  brought together 29 participants including representatives of the Nigerian Army (JTF Unit), Nigerian Police, Nigeria Security and Nigeria Security and Civil Defence Corp, CSOs and Project Community Members (Community Monitoring Groups). It was highly participatory and the participants exhibited a high level of commitment in ensuring their contribution towards the promotion and respect of human rights and the implementation of the Voluntary principles.

Mr. Jerry Nwigwe, senior programme manager LITE-Africa applauded the various security commands for selecting participants from their legal units stating that the main objective of the workshop was strengthen the capacity of stakeholders on human rights principle to guide their operations.

Speaking at the training the Programme Manager of LITE-Africa, Mr Elomenheremon explained that the Voluntary Principles on security and human rights provide guidelines to companies on maintaining the security of their operations within a framework that ensures respect for human rights.  It focuses on respect for civil and political rights, such as liberty, security, freedom from arbitrary arrest and detention or cruel, inhumane, or degrading treatment.

Other sessions sensitized participants on the Code Of Conduct for Law Enforcement Officials, Understanding Torture, Cruel, Inhuman And Degrading Treatment, Relationship Between Business, Security, And Human Rights, Chapter Four of the 1999 Nigerian constitution as amended in 2011.

Assistant Superintendent of Police, Simion Nathaniel said “the areas covered in this training are very encompassing especially in regards to the Voluntary Priniciples as I am hearing it for the first time. LITE-Africa has done marvellously well for such a training as it has given the security officers the skills and knowledge for them to apply caution in the course of their daily activities.”