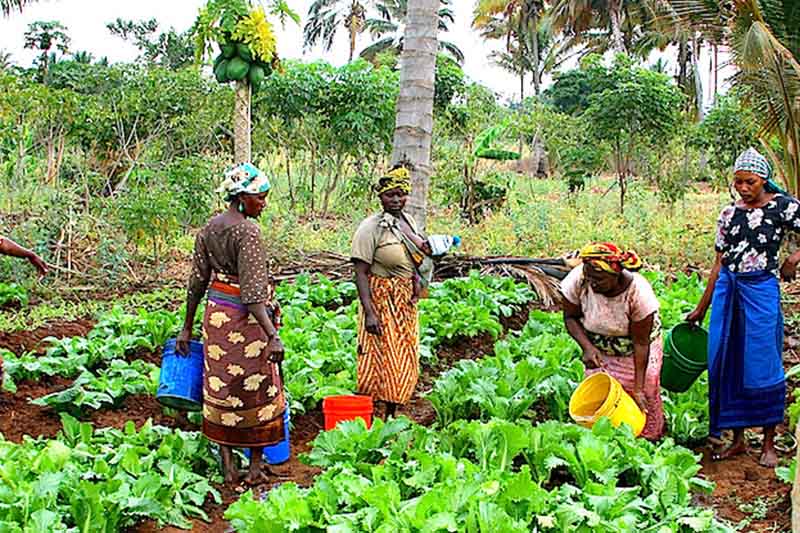 IF RURAL WOMEN WERE MORE INCLUDED IN COMMUNITY DECISION MAKING,
WHAT WOULD BE DIFFERENT?

WHEN EXCLUDED, WHAT ACTIVITIES DO THEY ENGAGE IN TO MOVE THEIR OWN
DEVELOPMENT AGENDA FORWARD?

Riverine and rural women are often excluded from participating in community decision making about development. In only 8% of communities surveyed by NIDPRODEV have the women stated they are included in community decision making. This decision to include the women in these traditional societies belongs solely to the male leadership—the gatekeepers of community change. (From experience, NIDPRODEV recommends that, in any gender sensitization project, the project designer develop two separate training workshops — one to sensitize the male leadership into not fearing greater participation by women in community decision making and one to sensitize the women into believing they have the right to participate.) One suggestion for future research is to help identify under what conditions traditional male societies in the Niger Delta are most likely to open the door to full participation of women in decision making. Findings from NIDPRODEV’s survey of 120 Niger Delta communities in an EU-sponsored project suggest some variables that appear to influence outcome, such as how many generations of education the community has experienced. Communities in their 6th or 7th generation of education have a much higher probability of (i) greater women inclusion in decision making and (ii) in women receiving benefits intended for the community as a whole compared to those communities with only 2 or 3 generations of formal schooling.

In the absence of greater inclusion of women in community decision making, community women have found ways to pursue their own development agendas. For those engaged in research or program design for rural or riverine community women, the following responses by community women to questions about “self-help” projects and how community life would be different if they were more included in decision making, should be illuminating. Specifically, women in one NIDPRODEV project were asked to discuss:

(i) Education: Because of the lack of teachers in their primary school, the community women decided to contribute money to hire a female teacher, who is always available to teach their children even when the two teachers paid by government are not around to teach. This situation has being ongoing since 2000. Recently, the community men have joined the women in the payment of the hired teacher.

In a separate community, the community women provide food items for Youth Corp Members (Nigeria’s post-college service requirement) posted to the community school, in order to encourage their stay and make them feel at home to teach their children effectively.

(iii) Rental Services: The community women met and established a rental services operation of plastic chairs, tables and canopies for those within and outside the community. The operation has been successful as a income generation activity for the community women. They use the money to feed their families.

(iv) Fishing Boat: The community women met and contributed money that was used to hire a fishing boat from people from Ghana. (Note: Only community men engage in deep sea fishing, which is more lucrative than the shallow water fishing done by women.) The hired boat and Ghana fishermen go into the high sea to fish and bring their catch back to the community women who sell it to others for a profit. This activity is mainly done during the dry season when there are fewer waves in the high sea. The women use part of the profits to buy fuel for the Community Generator that provides light for the community.

(v) Construction: The community women had earlier constructed a Teachers Quarters, which the women built with planks and zinc. (The quarters were destroyed during a “crisis.” Now the teachers are living among the people in the community.

In a separate community, the women took control of a building that had been abandoned during construction many years earlier. The women built a roof for the building and installed windows and doors. They use the building now for a Women’s Meeting House.

Primary School Building: On the primary school building, the community women wrote a letter to Chevron Nigeria Limited (CNL) in 2000 stating that they wanted the school building to be built through their direct labour process and not to award the school building contract to an indigenous contractor who might begin the project but ultimately leave it abandoned and incomplete. As a result, the contracting process was put on hold and CNL asked the men to meet with community women to resolve their differences.

Accordingly, the men met with the women, who told the men of their concern of completion of the school building project, since their experiences have shown that “our men don’t like completing community development projects awarded to them.” At the end of their meeting, both men and women of the community finally resolved that the school building is a “must complete” project. Based on the men’s commitment to the women, the contract was awarded by CNL in 2001 and was completed by an indigenous contractor.

Teachers’ Salaries: The community women contribute equal amounts of money for the payment of teachers engaged by the Parents Teachers Association (PTA), due to the lack of teachers in the schools.

Primary School Building: The community women gathered and made a case to SPDC (Shell) for the construction of a new primary school, but there was no positive response from SPDC. The women — through a 13-woman delegation — made another move to the Warri North Local Government Authority, who promised to forward their demand to SPDC. Three months went by without a response, so the women decided to disrupt SPDC’s operations. Their disruptive activity lasted for two weeks, within which period the community women were grouped into Shifts A, B and C to allow for their action to go on around the clock. After two weeks, Shell started a road project they had requested earlier; this act led to the women returning to Shell the keys they used to lock up the SPDC premises. It was during this period that the primary school building was also approved and built, and a community water supply scheme was approved.

(iii) Building in Post-”Crisis” Period: After the fighting between Itsekiri and Ijaw, there was no accommodation within the community. The crisis had rendered most of the women homeless. During the negotiation of EGTL Phase “3,” the community women demanded for monthly payments to take care of themselves. The women’s group — which is known as the Ugborodo Women and comprises women from Ode-Ugborodo, Ogidigben, Madangho, Ajudiabo and Ijala communities — met and agreed that they would not share the money that would be paid to them. Instead they used the money for development projects in the five above communities.

(iv) Oil Company Employment: In 2002, the community women made a peaceful demonstration to Chevron Nig. Ltd (CNL) premises in Escravos. They gained entrance into the premises and occupied it for about two weeks. The essence of the protest was for CNL to create special employment chance for their youths. During their “takeover,” thirty-two more of their youths were employed by CNL. Also, a Passport “19” Speedboat was provided for each of the Ugborodo communities and an agreement was reached between CNL, Government, and the women’s communities. Both the men and women from the communities signed the agreement.

(v) Road Construction: The community women heard of the planned Benin-Ogbudugbudu Road construction and cleared the access road for surveyors to have easy access to carry out their survey work. Although the survey work was completed, the project has yet to begin.

(vi) Radio House: The women’s group joined with the youth group to build a radio house for the community, which is used to inform the community of events and provide plastic chairs for seating.

(vii) Community Decision Making: Initially Town Hall Meetings were called and women had an equal opportunity to participate in the decision making process. Later, however, decisions were taken by the Ora-Aja and the men without informing the women or demanding for their input. The women felt challenged and made the move to correct the status-quo by meeting the Ora-Aja and the men on the need for women to be participating in the decision making process of the community. Presently, women are considered in the decision making process in the community as its serves the best interest of the community in development. (Note: NIDPRODEV has observed through its work with the community women involved in the successful 2002 takeover of oil platforms that there is now variation in the current level of proactive behavior among the different communities of women who participated. In all the communities, it appears as if the men attempted to suppress women’s “political” activities after the take-over. In only one of the communities were the women successful in convincing the men to allow them to continue their “push.” A potential research agenda would look at understanding the variables that contributed to the variation in women’s proactive political momentum following the single event (flow station takeover) that brought them all to the same level of feeling empowered.)

WOMEN’S RESPONSES TO WHAT CHANGE IS NEEDED IMMEDIATELY IN THEIR COMMUNITY:

Women’s Support for Increased Dialogue: According to the women, the youths have formed an alliance with contractors, which the women believe could hinder the Community Monitoring Group from doing their work effectively. On this note, the women would champion a dialogue process with the youths to allow the CMG members to carry out their job effectively for the community and ensure community development projects completion — while the skilled and unskilled youths would be engaged by the contractor based on their competencies to carry out their jobs with the contractor.