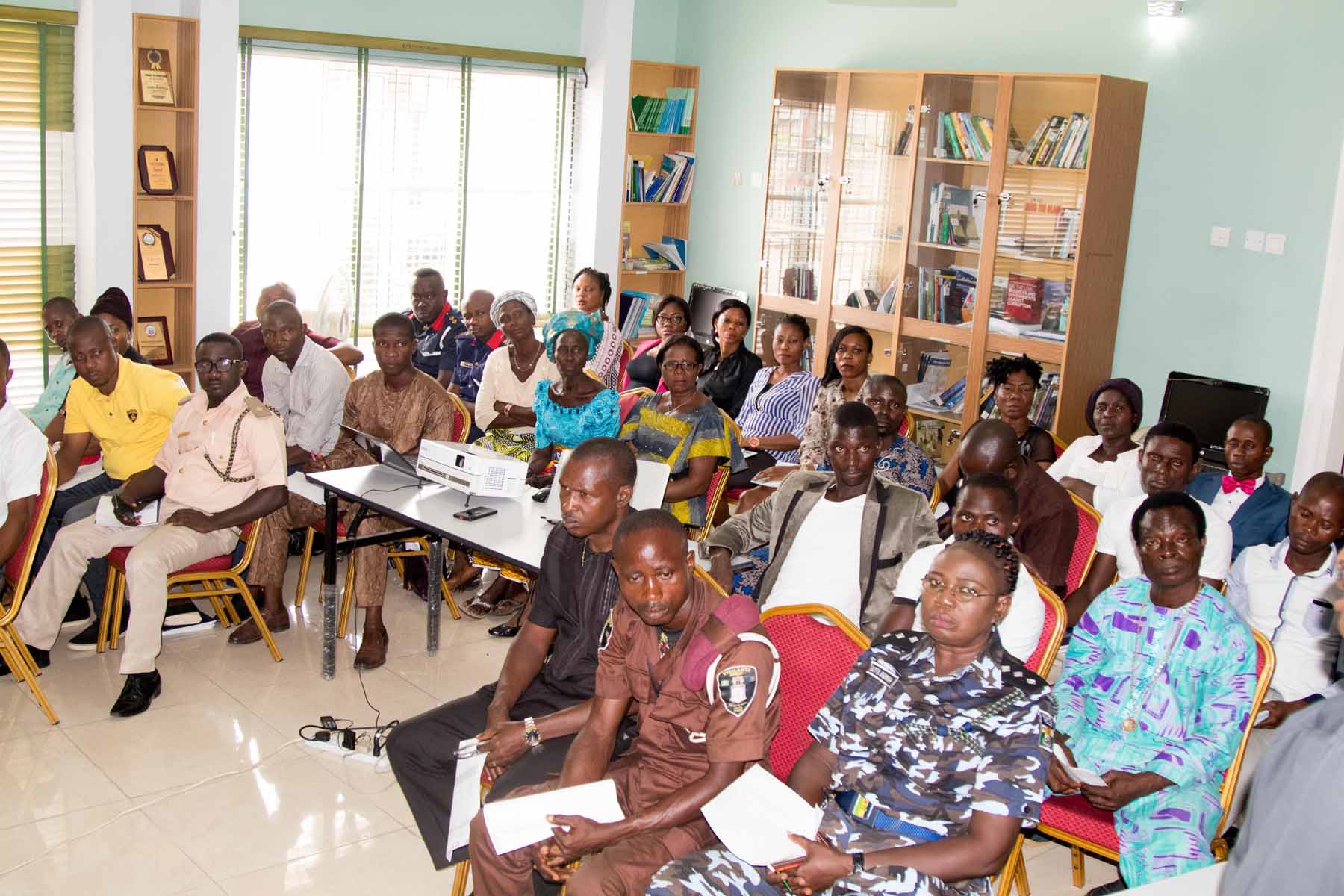 LITE-Africa became a full member of the Voluntary Principles Initiative, which made us the first African national NGO to transit from an engaged NGO to a full member.

We have continued to promote the VPs in Nigeria and to ensure the adherence and successful implementation of the VPs by fostering dialogue and collaboration between multiple stakeholders including local communities.

LITE-Africa is a member of in-country working group and has participated in several meetings with other members of the Civil Society, government institutions, companies and embassies.

As a result of LITE-Africa’s advocacy efforts, the nation’s intervention agency; Niger Delta Development Commission (NDDC), increased transparency and accountability efforts by creating a portal where all the agency projects are listed with details. It also published its 3rd quarterly report covering from July -December 2016 with a detailed report of income and expenditure, list of abandoned, ongoing and completed projects. It has also inaugurated an Independent CSOs Project Monitoring Committee with LITE-Africa as one of the regional coordinators.

LITE-Africa sensitized well over 390,000 persons on public resource management and the need to increase citizens’ participation on the activities of the Niger Delta Institutions (NDIs) through a twitter conference. CSOs who opened twitter accounts as a result of the twitter conference have continued to use this social media tool maximally for public awareness and advocacy.

Through LITE-Africa handholding and capacity building efforts, local partners and CSOs have developed the capacity to conduct Citizens Report Cards (CRCs) on their own which has enabled citizens to hold government more accountable.

PENDISA was implemented in Cross River, Delta, Edo and Ondo States, in which LITE-Africa involved citizens in evidence-based advocacy. Some of the activities in the project are co-implemented with ANEEJ in the anchor-cluster model.

Community-led GMoU structures were also equipped with advocacy skills, and transparency and accountability tools to engage NDIs and create public awareness campaigns on the mandate of the NDIs. The engagement between civil society, GMoU communities and NDIs is expected to lead to more transparent and accountable institutions working for economic growth and development of the region.

LITE-Africa’s advocacy efforts with its cluster members and other CSOs in the region, served as a tonic for Niger Delta Development Commission (NDDC) to publish its 3rd quarterly report covering from July – December 2016, with a detailed report of income and expenditure, list of abandoned, ongoing and completed projects.  The issues of abandoned projects and poor coordination of development efforts region identified by LITE-Africa and ANEEJ were highlighted in the 3rd quarter report of the Commission. Flowing from this, NDDC has also inaugurated the independent CSOs project monitoring committee with LITE-Africa and ANEEJ as regional coordinators. This is a giant step towards engendering transparency and accountability in the activities of the Commission. This report can be accessed through www.nddc.gov.ng

The Strengthening Citizens Voice for Change (SCV4C), is a project financed by the National Endowment for Democracy (NED), to create an avenue for community members to use the power of collective action to push for measurable public reforms.

This pilot project ensured increased engagement between civil society organizations in the political process and developed and expanded the use of social and traditional media to promote public accountability in Delta state.

We brought together 25 CSOs based in Delta State; built their capacity on budget advocacy and the use of social media to increase citizen voice to demand accountability and transparency in governance in Delta State.  Special attention was paid to strengthen the capacity of CSOs to monitor the performance of Delta State House of Assembly.

This was achieved through the following specific objectives:

LITE-Africa also conducted social audit to assess citizens’ participation in the budget process, the state of public services, and public perception about governance in the state which also allowed citizens to rate government performances.

The social audit is one way of using collective action to support government reform agenda in the state.

CNL training programme on the VP on security, human rights

To promote responsible business practice and greater respect for human rights through the implementation of the Voluntary Principles on Security and Human Rights in Nigeria, LITE-Africa in collaboration with Chevron Nigeria Limited (CNL) – a member of the corporate pillar, facilitated trainings to ensure greater respect and protection of human rights and fundamental freedom in the extractive industry by security operatives.

The training programme also aimed at enhancing participants’ understanding of human rights due diligence, torture and the use of force and firearms as it relates to the United Nations convention against torture and other cruel, inhuman or degrading treatment and punishment and the UN code of conduct for law enforcement officials, especially for the government security forces,

The Voluntary Principles Initiative became necessary because of widespread international concern over the way security forces operate while protecting oil and mining installations in many parts of the world.  Using the instrument of the Voluntary Principles on Security and Human Rights, LITE-Africa has continued to provide capacity building and guided policy reforms towards integrating human rights into companies’ operations in Nigeria.

National Initiative for Sustainable Peace-building Architecture (NISPA) funded by European Union, coordinated by the Economic Communities of West African States (ECOWAS) is an intervention designed to strengthen peace and security in Nigeria.

The 10 months action is being implemented in three states of Nigeria, including Benue, Delta and Enugu States respectively.

The overall objective of the Action is to support local and cross-border community dialogue/peace building initiative and training that links local initiatives (especially on women’s initiatives) through Civil Society Organizations to ECOWAS peace and security agenda.

It is expected that at end of the Action, at least 100,000 persons would benefit directly and indirectly from it.

Besides, the Action would lead to increased acceptance of non-violent methods of conflict resolution within the target zones, ensure that women leaders play enhance role in decision making and peace initiative, enhance regional peace and improve socio-economic development of the country.

To evaluate the impact of the social investment scheme by extractive sector in Nigeria, Chevron Nigeria Limited and her Agbami partners (Star Deep Waters Petroleum Limited) engaged the services of LITE-Africa to assess its projects in education and health, especially  Science Laboratories, libraries (traditional and hybrid) and chest clinics, spread across the country. These projects were embarked upon as part of its corporate social responsibility.

The goals of the projects are to improve the standard and quality of education of the students in the benefiting schools through developed reading culture; improve academic performance of students in science subjects and reduce the burden of TB in the communities served by the chest clinics.

The project’s scope of work includes collating baseline data for new projects, performance measurement and monitoring on the 1st and 2nd years and evaluation on post 3-years deployment.

LITE-Africa’s staff will visit the schools and the chest clinics to pull together data using the qualitative and quantitative methods and also facilitates stakeholders’ conference after the evaluation.

LITE-Africa will employ the Precede-Proceed model to appraise these projects. The model is a cost–benefit evaluation framework that can help health programme planners, policy makers and other evaluators analyse situations and design health programmes efficiently.

In a bid to consolidate on the achievements made over the years, we organized a two-day retreat (November 3-4, 2016) for staff and stakeholders to review the 2012-2014 Strategic Plan, identify strength, weaknesses, opportunities and threats (SWOT) and cross fertilize ideas towards developing a new 5-year strategic plan (2017-2021) for the organization.

We identified key issues which we think would make us successful in the coming years. Our Vision and Mission statements were revised and the thematic areas expanded from three to five in line with our guiding principles. Our areas of focus are: Good Governance and Accountability, Human Rights, Humanitarian Support and Health Services, LITE’s Development Finance Programme and Sustainable Livelihoods.

Vision: A world in which the principles of democracy and human rights guide the actions of governance in peace and development (replace with the new)

Mission: To facilitate sustainable development, promote good governance and inclusiveness, and collaboration in Nigeria and in the global arena. (insert new one)

LITE-Africa became a full member of the Voluntary Principles Initiative, which made us the first African national NGO to transit from an engaged NGO to a full member. We were also subsequently elected into the VPI steering committee and board of directors.

We will continue to promote the VPs in Nigeria and plan to promote compliance and successful implementation of the VPs by fostering dialogue and collaboration between multiple stakeholders including local communities.

We will support the VPs in-country implementation working group meetings in Nigeria, hold consultative meetings with relevant Federal Government Ministries VPs champions and members of the inter-governmental ministry in Abuja and support independent meetings to fast track the process of Nigerian membership to the VPs. The meeting will bring together different members of the Government Inter-Ministerial Working Group on the VPs (GIWG), and different stakeholders including pillars members from the government, corporate pillar and NGOs.

We also plan to facilitate trainings on the VPs. The training will increase knowledge and awareness of the VPs for CSOs who are members of Nigeria Coalition on Business and Human rights, government officials including members of the Government Inter-Ministerial Working Group and the National Human Rights Commission (NHRC), and community leaders on VPs to advocate for implementation of the VPs at the government and community level.